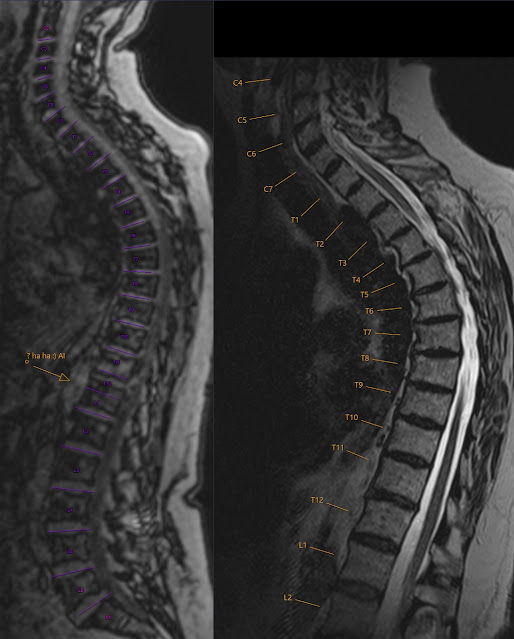 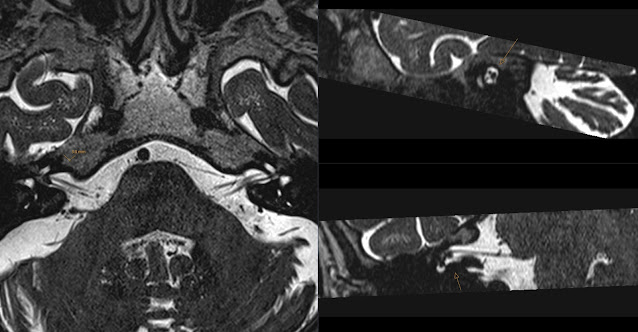 Remember my old post about anatomy of the Internal Acoustic Canal (ICA). I mentioned that to me it looks like " Monkey Looking at Cerebellum " in cross section. Mouth of the monkey being Vestibular Nerve and upper eye being 7th nerve (Facial Nerve) (7-UP!) and lower eye being Cochlear Nerve.  Today I came across this exam showing a Small Vestibular Schwannoma (VS) deep in the Internal Acoustic Canal.  Note that the VS is located in the "mouth" of the monkey.  This is a section just next to the VS showing a bit "sad face of the monkey". :(
Read more

A person with known in family KRIT-1 gene mutation shows multiple (uncountable number) cavernous malformations (cavernomas) on the SWI sequence (most to the left on both images). The largest one located temporo-occipital in the right hemisphere (to the left on the images) is visible on T2 sequence and hardly noticeable on T1 without and with Gd contrast. Other multiple cavernomas are hard to spot on other sequences. Same situation in the posterior fossa.  According to the literature:  "The KRIT1 gene (also known as CCM1) provides instructions for making a protein that strengthens the interactions between cells that form blood vessels and limits leakage from the vessels."    https://medlineplus.gov/genetics/gene/krit1/ "Mutations in Krev1 interaction trapped gene 1 (KRIT1) cause cerebral cavernous malformation, an autosomal dominant disease featuring malformation of cerebral capillaries resulting in cerebral hemorrhage, strokes, and seizures."    https://pubmed.ncb
Read more 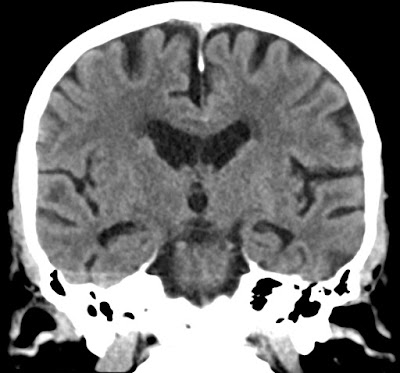 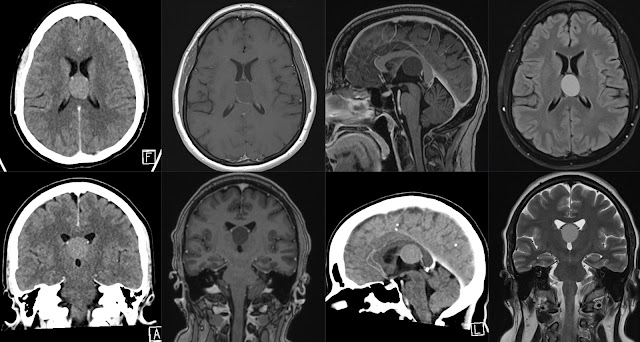 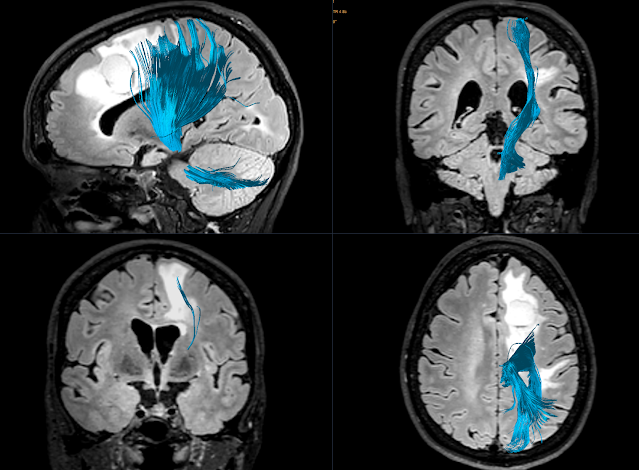 Recently when reporting a brain MRI of a patient after tumor operation I came across beautiful functional and MRI Tractography images showing corticospinal tracts relation to the brain tumor in the frontal lobe. The interpretation of this study was that most ventral parts of the corticospinal tracts are located near tumor's dorsal part and the arcuate fasciculus was unaffected. Of course there were more images showing the arcuate fasciculus in more detail. The exam also included functional (fMRI) study showing motoric and speech locations. I'm not expert in this field but I wanted to show you that we are moving closer to using such functional studies in daily practice.
Read more

As a new hobby project I recently took on some digital piano and synthesizer training. Part of it is to learn to read the notes. And somehow I keep on seeing five lines of staff even om MRI images :) ! This localizer incidentally even shows the grand staff . :)  You can see a little annular tear in a place of previous disk herniation.  The numbering of lumbar levels is often a matter of discussion. Previous exam has called the lowest lumbar vertebra as L5. I used the same numbering but in fact the vertebra that is called L5 on this image is a transitional vertebra that is partially sacral vertebra - so it could be called S1. I made a note on my report for the clinician that in case of operation it is important to correlate the level of operation with fluoroscopy .  For correct numbering of spinal lumbar levels I look for proximal parts of ribs 12 on sagittal images and count from what I assume as L5 upwards. When I have the whole spine or CT, especially with coronal images, then the
Read more
More posts